Miami Music Week is off to a strange start to say the least.  Ultra hasn’t even fired up their speakers yet and we have already seen a few of the worlds top DJ’s in a bit of trouble.  Afrojack announced on his twitter that, although he is fine now, that he was overdoing it a bit and was dehydrated and exhausted.  He has since bounced back and appears to be back in the fast lane. 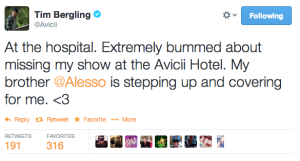